We wanted to demonstrate that our little board game box actually contains a full size board game inside including over 250+ pieces. What started as a simple idea for a gif quickly turned into a much larger stop motion animation project.

Firstly, if we were going to do a stop motion animation we'd need a rough idea of what was going to happen and when so I drew up this crude storyboard sketch in MS paint of all things.

Now, this animation took a few days to complete and after a few test runs the animation had changed a bit since this sketch was drawn but is still served its purpose for the time it was needed.

We knew that we wanted the meeples to walk slower than the rest of the elements but we didn't know how much slower so we created a simple test to determine their speed and ended up going with a speed between the purple and white meeple.

We then created a simple test run to see where we'd place all the elements and at what point in the animation they would appear.

We quickly realised that we'd need a decent source of lighting in order to avoid some painfully obvious shadows. Initially we thought that being by the window would offer us bright natural lighting but we quickly changed out plans after noticing that the sun kept going behind clouds and sometimes would just take over the shot completely. 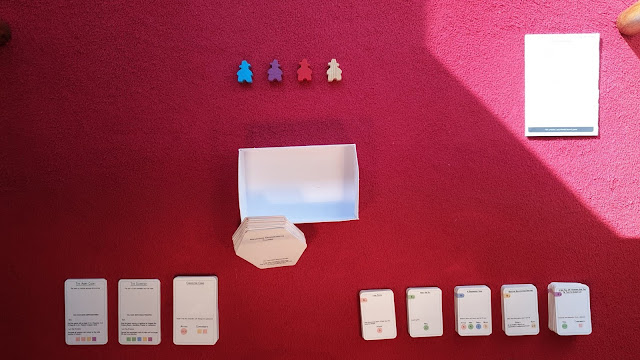 We had some halogen house lamps lying around so we attached them to the camera rig pointing down towards the stage. They fell a few times and we ended up replacing a couple of bulbs until the lamps were secured in place. 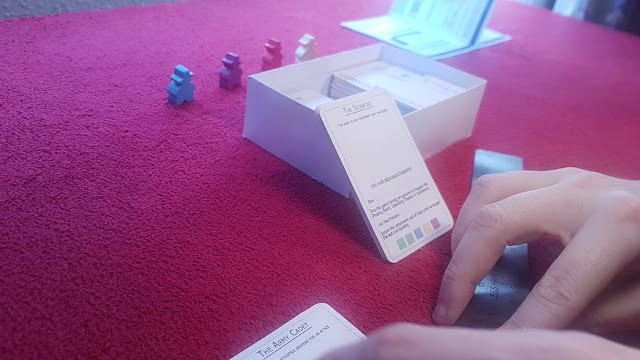 Next was the actual animation. We used a Samsung Note 9 with HD Camera Pro to take each photo. I prefer the options the premium camera app has over Samsung's default camera.

Lucky we could reduce the camera shake per photo quite a bit by using the Note 9's bluetooth stylus as a remote to snap photos. The stylus did need recharging a few times but overall it saved us quite a bit of time.

Stephen then took all the photos and added and edited them in HitFilm Express which is a free video editing software while I sourced the music and sound effects from ZapSplat which is a website that offers free sound effects & royalty free music.

The resulting video is a test unboxing animation that we'll be using to showcase the different components of the game. Once TULP-BG has art and maybe a name we're planning on recreating the animation again with better lighting and sounds as a promotional video for potential interested parties.

We're still currently playtesting the game with different numbers and different groups of people and so far the game is holding up pretty well from a gameplay standpoint.

We've heard your feedback and we'll be changing a few small gameplay things going forward including the addition of some basic artwork to help playtesters going forward visualise the game easier.

If you're in or around Glasgow, Scotland during May 2019 and you'd like to be a part of one of our playtesting groups then you can follow us on Facebook and Twitter. We'll be sharing future playtesting events soon.