Ellie here and this week I wanted to talk about crowdfunding. Now, being a game developer, I’m no stranger to the crowdfunding concept. I believe most of you readers will be the same, but for the sake of those other few, allow me to summarise.


The way projects are funded normally is through some sort of investment. Either through bootstrapping cash together, which is what we at late panda have done for Skorian Tales, or through investors. These are usually rich people who believe your project will turn a profit so they invest some of their money to get the project to completion in return for, well, more money. This is a very rudimentary version of what usually happens. With crowdfunding, the investment comes from hundreds to thousands of individuals who want to see the project completed. This spreads the cost out so the investment per person is low while the rewards can be great. As with any investment, the project can fail to deliver and thus the investor loses their investment. This is important to keep in mind whenever you decide to do something like this.


I’ve had some experiences backing up crowdfunded projects in the past and I recently invested in another game called Pine that I’d like to talk about during this post.

The first project I backed was a small game by an individual Edinburgh developer Kenneth Ward from Incandescent Games. Kenneth was only asking for £5,000 total and I believe I paid about £5 of that to get a digital copy of the game back in 2013. The game has officially been released to steam this February after going through alpha, beta and greenlight. It might have taken a few years to get the final release but you’ve got to remember that Kenneth was working along on this project.

It’s a game about building robots and being able to program the circuitry of those robots to complete challenges. It’s pretty impressive. I was interested in the game but at the time didn’t know much about crowdfunding so £5 seemed like a safe bet. Thanks to Kenneth’s tireless work, this eventually paid off for me but I’m guessing the £5,892 wasn’t actually enough to complete the game. This is something you should also take into consideration when crowdfunding. Make sure the funding amount is enough for the project.


You can view the Logicbots Kickstarter page here.

The Stomping Land. Oh my, what a mess.


If you don’t know The Stomping Land’s Kickstarter campaign garnered a lot of hype. The campaign trailer looked promising and a lot of people wanted the game that was promised. This is evident due to the fact that the amount asked for was $20,000 while it ended up receiving $114,060. Over 5 times the asking amount! From over 4,400 individual investors!


The game was released to steam greenlight and, while being an interesting and somewhat fun experience, it was not at all near the campaign promises. This was understandable as the game was still being developed. We waited for updates but no updates came. Then the developer went silent. Then people started to get angry, demanding refunds. The game was eventually removed from Steam and those thousands of investors, including myself and Stephen, were left with nothing.


A cautionary tale for all would-be investors, this is one unfortunate scenario demonstrating what can, and in fact did go wrong.


Now, I’m not at all sure what happened from the point of view from the developer as he decided to not engage with his audience but I’m guessing there was just a lack of experience.


Looking back at the page now I see a lonesome Alex Fundora proclaiming that he could finish the game by himself on a budget of $20,000. With additional funding, he’d be able to hire an artist to make the island larger. He may have worked on large titles such as Skyrim but those large, open world role-playing games require hundreds of people, millions of dollars and take years to develop. 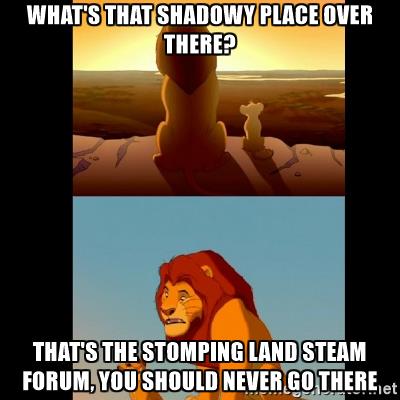 Pine is a game currently being developed by Twirlbound Games and is actually the reason I wanted to write this post. I recently came across this campaign on Twitter and thought I’d check it out.

From the looks of things so far, this campaign is ticking all the right boxes for a successful game. Promotional materials such as pitch videos usually show highly scripted/edit versions of gameplay to generate hype for the game. This looks to be true for Pine as well but the important thing to note here is that, like Logicbots, there’s a playable demo of Pine out right now. You can see people playing the game and you can judge for yourself if it’s worth backing at this point.

Twirlbound is an award winning team of 6 developers who have already previously released the game With the Wind for iOS. This shows that they have a track record of finishing games their games, unlike Alex Fundora. Twirlbound seems to have a small but well rounded and dedicated team made up of everything from animators to artists to programmers.


Based on the information they’ve given in their campaign, the asking amount looks like it’s close the amount they’d actually need to finish the game within in a year or so. Looking at the amount of progress they can make within 13 weeks also gives me high hopes for this game.

Which is why I’m writing this post. I’ve backed them and if you like what you’ve seen I’d ask that you help them out. I want to see this game succeed.


You can check out the Pine Kickstarter page here and if you like what you see you should consider investing in them.


This is not a paid promotion btw. This is just my own opinions and thoughts surrounding Crowdfunding from an individual investment point of view.

“The more communities in which you are an active participant, the more likely it is that you’ll be happy” - Ted Leonsis
By Unknown
Labels: Alex Fundora, Crowdfunding, Kenneth Ward, Kickstarter, LogicBots, Pine, Pine Kickstarter, The Stomping Land, Twirlbound

So this week I would like to talk about the project we are developing as part of our 1GAM challenge for March.

Before I get into that though I would like to discuss my thoughts on the 1GAM challenge as a whole so far. We have developed two full projects so far Echoes of Hope and Qbits, the former a narrative based adventure about dealing with suicide and the latter a idle based tapping game we developed to ease into the challenge. We aim to create different projects each month, not only to expand our portfolio, but also to help us develop more games in the future due to the modularity with Unity. We understand that these projects we are creating are very short games and do not hold to the same caliber as current mobile games or our own Skorian Tales. However, as I said the projects are meant to build up the portfolio and assist us with future projects by reusing some mechanics from these projects.

That all said, let’s talk about our March game. We decided we wanted to build a game for our company mascot “Late Panda”. After some pitching we came up with an infinite runner type game with the “Panda” realising it is “Late” only to run through a forest aiming to reach their goal.

We will be releasing this game onto Android as well as making it available on our website. The Panda will gradually increase speed as the game continues dodging the obstacles as they appear making the game more difficult as time goes on.

The game will feature a cartoon like artistic style we think is most suitable for the theme of this game. We can use the mechanics of this game to create other types of infinite runner games that we may develop for outside companies in the future.

We also created a game directory built into this project to allow us to signpost to future or past projects in one place. This can allow our entire backlog of developed titles to be available to any player or any of our games throughout our company lifetime.

So I’ll leave off this blog with some shameless self promotion, as I said earlier during this 1GAM challenge we have released two projects so far; Echoes of Hope and Qbits.

Echoes of Hope is a narrative based adventure with two characters, one coping with suicide and the other a friend desperately trying to help them through this difficult time. We created this project in hopes we could help someone currently going through these issues or if they know someone who is.

Qbits is a mechanic based idle game we created to ease into the challenge, it features an upgrade system the player uses to become stronger and stronger in order to clear the faces of a cube. We took inspiration for the game from Curiosity, but we wanted to create a game that players could enjoy and use to relieve some stress.

“In life you have three options with any situation that is a challenge. Remove yourself from the situation, change it, or accept it” - Dr Phil

It’s March which means a few things to us at Late Panda. The first mainly being that Cadbury Creme Eggs are back on store shelves. Secondly, we’ve started working on our #1GAM game for March and thirdly, our game for February has been released now on Android.


In this post, I wanted to talk to you about Echoes of Hope, give you a rundown of the game, why we created it and the future of the IP (Intellectual property).


First things first, It’s called Echoes of Hope. It's not really a conventional game, it's more of a short narrated experience that tries to explain the journey of dealing with a suicidal friend through visual metaphors manifested as simple puzzles. It's designed to be thought-provoking and teach people how to spot the warning signs of depression and feelings of suicide.


If you’re a regular reader you may be asking yourself something along the lines of “Why do something like this?”. There are a few reasons. A while ago Stephen read an article on the Washington Post about how effective certain types of brain training activities could help reduce the onset of Alzheimer’s disease. The preliminary research data suggested that playing a certain speed-of-processing game, that adapted its difficulty level based on the participant skill, for 10 hours could reduce the chances of developing Alzheimer’s by up to 48%. This was a big inspiration as we realised that it could be possible to develop games that can potentially help people or improve their quality of life.


The second reason was due to Qbits (our January game). If you don’t know, Qbits is an idle game, the goal is to destroy as many layers of a cube as you can. There are upgrades you can buy with in-game currency that help you destroy bits faster. We took a lot of inspiration from 22Cans Curiosity project. Anyway, the point is that Qbits doesn’t really have a story so for our next game we wanted to go in a completely different direction and have an artsy, narrative driven experience.


And so, Echoes of Hope was born. We hope in the future to branch this IP out to other chapters dealing with different mental health issues such as schizophrenia, and Alzheimer's disease. For now, we’re hard at work on our next game for March while simultaneously improving the current version of Echoes of Hope based on feedback from gamers and mental health sufferers.


If you like, you can check out Echoes of Hope on Android and leave us some feedback. It’s a free game, and like Qbits, doesn’t include adverts. These games are purely non-profit.