Time for some details!

After the last blog we all spent some time enjoying the holidays, as I am sure you all did as well, then quickly got back to work on our game.

In this blog I will be revealing some extra points about the game we are developing codenamed LPG (The Late Panda Game).

So LPG is a role playing game we are developing for the mobile device. This game is targeted at the hardcore gaming audience however we are designing the game to cater for shorter play sessions. This will allow you to enjoy the story of the game for 5-10 minutes or even 1-2 hours, if your mobile device has enough battery life!

Our main goal with this game is to show the hardcore gamer that a mobile RPG can work just as effectively as a console/PC RPG. I know there are RPGs on the mobile market at the moment but most are designed identical to typical console/PC RPGs. We are focusing the design of the game to effectively work on mobile devices, and give you the narrative experience of a console/PC RPG.

So I'll give you a little plot details. LPG is set on a world similar to Earth, with elements that our planet lacks. The humans that currently live on this planet are descended from humans that were transported their over 1000 years ago during a massive dimensional collapse. A small faction of humans has risen attempting to return to their rightful planet to reunite with the rest of their species.

I thought I would just tease the plot for now, we have released artwork and models in the past so feel free to look through our Blogs to see what the world might look like. "All things subject to change" applies here since we are mid-development.

If you like what you have read or seen then "Good news everyone!" we are looking for people to test our demo version of the game due to be released in the coming months, if you would like to be involved send us an email at beta@latepanda.com with subject "Demo".

On an unrelated personal note I attended the GlobalGameJam in Glasgow last weekend, it was super fun and I got to meet a lot of interesting people and see some awesome games that everyone made over the weekend. If you want to see the games that everyone made then check out the GlobalGameJam website, narrow it down by country if you like but check out as many as you can. If you want to see what the team I was with created check out Bloody Toys.

Thought I would embarrass myself a little and show a photo taken by Jon Brady (check out his website) while I was jamming. 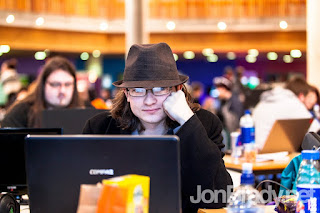 I may look bored but I was just VERY tired!

That's all I have to say for now, I would give the run-down of what we have been doing over the past few weeks but I don't want this Blog to ramble on for too long so update again some other time.